Dr. Bernard Lewinsky, a Los Angeles cancer specialist and the stepfather of former White House intern Monica Lewinsky, received a letter from The Clinton Legal Expense Trust asking him for a donation to help the President pay off his attorneys’ bills (inflated in large part thanks to Clinton’s involvement with Monica). Dr. Lewinsky’s reaction? He marked the missive “Return to Sender. You must be morons to send me this letter.” The good doctor also sent a photocopy of the envelope to Los Angeles Times reporter Steve Harvey, whose “Only in L.A.” column focuses on the more devilish side of the City of Angels. Harvey happily published a photo of the envelope Wednesday. 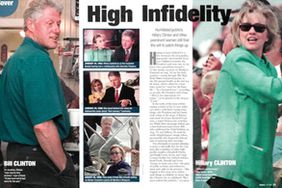