In celebration of Lesbian Visibility Day on April 26, we're looking back at how Megan Rapinoe, Da Brat, Lena Waithe and more celebrities publicly shared their truth

The talk show host's coming out was a milestone moment for the LGBTQ community in 1997, when she appeared on Time with the cover line, "Yep, I'm Gay." Soon after, DeGeneres made the decision to have her character on the ABC hit sitcom Ellen come out as well — becoming the first openly gay character on primetime TV.

"Leading up to coming out, I wasn't trying to be political," DeGeneres said in a 2017 interview for TIME Firsts. "I wasn't trying to be an activist. When I did, it just made sense that the character would come out, and it was the greatest thing that happened because it sent me on a different trajectory, and here I am now and there's no secrets. I'm not ashamed of anything."

In an interview for Variety's special Power of Pride series, the "Give It 2 You" rapper opened up about her decision to come out in March 2020 and why it "feels good to share with the world when you're happy."

Da Brat — who is currently dating businesswoman Jesseca Dupart — said she "always felt like being private is the better way to go," but ultimately compromised on going public with her relationship since her girlfriend openly shares her life on social media.

"My partner is a social media mogul, and when you get with somebody, you have to meet in the middle," she told the magazine. "I was like, 'Oh s---, I just came out after 20-something years!'"

"If I can inspire someone or help somebody to deal with their issues and their sexuality," she said, "then I'm here for it."

The U.S. Women's National Soccer team star publicly came out to Out magazine in 2012, after feeling a sense of internalized pressure to use her heightened platform thanks to the attention on her team following the 2011 World Cup.

Recounting the decision in her memoir One Life, excerpted in Elle, the athlete said that she "wasn't in the closet, but no one in the press knew I was gay, and that aspect of my life wasn't part of the conversation." She realized, "Saying something now might be impactful. I don't think I used those kinds of words yet, but I was making my way toward that conclusion."

"I'm gay, and an athlete, and I just want to be out," she said. Rapinoe got engaged to longtime girlfriend Sue Bird in October 2020, after four years of dating.

The "Sleepover" singer — known to her fans as "Lesbian Jesus" — struggled to come out publicly, she told Pride.com in 2019.

"I was always out to my close friends, but I still wasn't comfortable publicly. And I didn't want people to know that I liked girls, even though I had a video called 'Girls Like Girls,' " she told the outlet. She added that after the video went viral, she told her publicist, " 'I don't want my name on any out magazines. I don't want lesbian even close to the name Hayley Kiyoko.' I don't want anybody to know."

About a year or so later, she changed her mind. "I started releasing more videos after that, and they just became gayer and gayer. And then I realized if I'm scared then everyone else will continue to be scared, you know? And I was like, 'If I don't own who I am, what kind of a role model am I?' My fans really encouraged me. Having fans that supported me, that encouraged me to be myself."

The Emmy-winning writer and actress never intended to relive her coming out moment — but when Aziz Ansari asked her to chronicle the experience for her character Denise in an episode of Master of None, she changed her mind.

"It wasn't a hard thing to film," she told Bustle. "It was much easier than the actual conversation I had 10 years prior with my mom."

"Don't worry about making society feel comfortable," she added. "It's OK if they squirm, it's OK if they feel that they don't understand you. You gotta live your life out loud. That's when you'll find happiness and yourself."

Speaking about the similarities in the episode, called "Thanksgiving," and her own coming out experience, she told Vulture, "It was really just that one person for me, and we were in a diner — all that stuff is real — and it was post college." She continued, "It's scary; it's nerve-racking. You have to prepare yourself for the worst. I knew I wasn't going to be disowned, but the dynamic of your relationships change a little bit."

In 2018, The Hate U Give star, who is non-binary, came out as gay in a Wonderland interview with singer King Princess. Soon after, the pair went public with their relationship, which ended the following year.

"I was so overcome with this profound sense of relief when I realized that I'm gay – not bi, not pan, but gay – with a romantic love for women," Stenberg said in the interview, having come out as bisexual two years prior. "All of the things that felt so internally contrary to my truest self were rectified as I unravelled a long web of denial and self deprivation."

"I was flooded with a sense of calm and peace because everything that I struggled with or felt discomfort around finally made sense to me," Stenberg continued. "And once those floodgates opened and years of pent up pain and shame were released, I found the freedom to live my best life waiting for me just underneath."

The Orange Is the New Black actress, who identifies as gender-fluid, came out to her mom at 12 — and was surprised to learn it wasn't much of a secret. "She knew when I was 6 apparently," she told Willie Geist on Today. "I didn't know anyone else that was gay or a lesbian. So I didn't really know how to word it. So I was just like, 'I think I should let you know that when I eventually get a boyfriend, they'll be a girl.' And she was just like, 'I know.' "

The singer-songwriter opened up about the alienation she felt after coming out in her teens at the 2019 Grammy Awards while accepting the best American roots song for "The Joke," one of the three awards she took home that night.

"Americana music is the island of the misfit toys [and] I am such a misfit," Carlile said, according to HuffPost.com. "I came out of the closet at 15 years old, when I was in high school, and I can assure you that I was never invited to any parties."

"I never got to attend a dance," "The Story" singer continued. "To be embraced by this enduring and loving community has been the dance of a lifetime. Thank you for being my island."

At the 2020 Golden Globes, the Saturday Night Live star presented Ellen DeGeneres with the Carol Burnett Award in a moving speech, speaking about how Ellen's high-profile coming out helped shape her own life.

"In 1997, when Ellen's sitcom was at the height of its popularity, I was in my mother's basement lifting weights in front of the mirror and thinking, 'Am I … gay?' And I was," McKinnon said. "And I still am. But that's a very scary thing to suddenly know about yourself. It's sort of like doing 23andMe and discovering that you have alien DNA. And the only thing that made it less scary was seeing Ellen on TV."

Continuing to praise the talk show host, she added, "And if I hadn't seen her on TV, I would have thought, 'I could never be on TV. They don't let LGBTQ people be on TV.' And more than that, I would have gone on thinking that I was an alien and that I maybe even didn't have a right to be here. So thank you, Ellen, for giving me a shot at a good life."

The Cosby Show and That's So Raven alumna hesitated to publicly embrace her sexuality for fear of repercussions to her career. "I never thought I would come out because my personal life didn't matter," Symoné shared in Lexus L/Studio's "It Got Better" docu-series. "It only mattered what could be sold as part of the Raven Symoné brand."

The actress added that she knew she was gay by the time she was 12, but said she "kind of pushed myself to open myself up to look for boys." While attending college, she found an accepting community that helped her feel supported enough to come out to her parents.

The actress and singer married Miranda Pearman-Maday in June 2020.

The Real Housewives of Orange County star came out as a lesbian in a December 2020 interview with GLAAD, in which she also revealed she is currently dating a woman.

The "Talia" singer, whose real name is Mikaela Straus, revealed to Them that she "really came out in middle school." Speaking about the experience, she told the outlet, "I had my first queer kiss in the eighth grade. It was over the summer, and this girl I was friends with asked me directly if I wanted to kiss her at a party. Immediately after we kissed I was like, "F–. That was good. I'm gay." Six years later, queer love continues to teach me more and more about who I am."

The singer continued, "I want people to know that coming out takes time. It's a process and a privilege. There were so many people who fought for my generation to have this freedom, and I never take that for granted. For so long, queer visibility was accompanied by such intense fear, and it makes me think about how I move through the world now. I personally love being gay in public, and feel the most comfortable being out when I'm with my friends. I'm lucky to be able to express my queerness openly with those closest to me, and I think that's really beautiful." 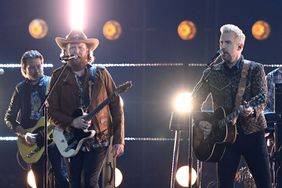