The motorcycle stuntman, who had been in ill health, was 69 years old

“Evel” Knievel, arguably the world’s most famous daredevil motorcycle rider, has died, according to his official Web site. He was 69.

Born in Montana as Robert Craig Knievel Jr., the stuntman extraordinaire rose to fame in the 1960s and became synonymous with high-flying attempts to clear impossible obstacles on his two-wheeler.

Only two days before his death, it was reported that Knievel and Kanye West amicably settled a federal lawsuit that the stuntman brought last year over the use of Knievel’s trademarked image in a video for Kanye’s song “Touch the Sky.” In it, West took on the persona of “Evel Kanyevel” and tries to jump a rocket-powered motorcycle over a canyon – an apparent nod to Knievel’s failed attempt to jump Idaho’s Snake River Canyon in 1974.

Knievel had been in frail health for some time. Speaking to USA Today earlier this year, Knievel – crippled with arthritis, recovering from a stroke and aching from his decades of bodily injuries he’d earned while performing – admitted he no longer felt invincible, as he had in his youth.

“I think about God a lot more than ever,” he said, “though I used to ask him, ‘Help me make a good jump.’ I’m awfully tough to get along with, but I’ll tell you what: I am a good person. I wish there was such a thing as reincarnation.”

“If there is a heaven, I don’t know anything else I can do to get there,” he told the interviewer, “and neither do you.”

Among his survivors are sons Kelly and Robbie Knievel, daughters Alicia and Tracey, 11 grandchildren and ex-wives Linda Knievel and Krystal Kennedy, 40, the former Florida State golfer who became Evel’s caregiver and companion despite their short, rocky marriage. 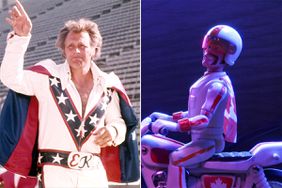 His Days as a Bone-Breaking Biker Behind Him, Evel Knievel Keeps Rolling as Painter and Pitchman

The Way We Were 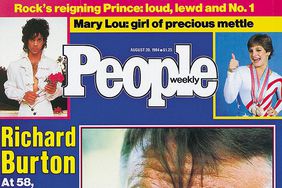 Life Swirls on for '82 Story Subjects