The actor checked himself into the hospital over the weekend after drinking, a source tells PEOPLE

Responding to an online report that David Hasselhoff was near death over the weekend due to alcohol poisoning, his lawyers released a statement saying the actor “was at no time in the condition described in those stories.”

“Mr. Hasselhoff spoke to his attorneys on Sunday and was absolutely fine,” attorneys Melvin Goldsman and Marci Levine said in a joint statement. “However, Mr. Hasselhoff is both disturbed and saddened by the fact that a certain individual is disseminating grossly inaccurate stories about him to the press for ulterior motives.”

They didn’t identify the alleged source of the stories. Hasselhoff, 56, is embroiled in an ongoing divorce with his ex-wife Pamela Bach. Her rep did not return a message.

A source close to Hasselhoff, who has spoken openly about his troubles with alcohol, did confirm the actor was hospitalized over the weekend after drinking.

“David became ill Saturday night but he was never unconscious, he never passed out,” the source says. “He went on his own power to his car and went to Cedars. They checked him out and released him in the morning. If he drank anywhere near the amount that was reported, they wouldn’t have released him so soon.” 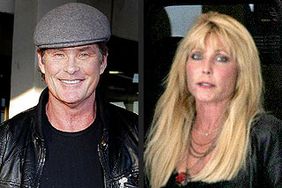