What happens in Cabo stays in Cabo. And on social media.

Bride-to-be Lauren Conrad headed to Mexico for a sun and sand bachelorette party trip in Cabo San Lucas this week.

The former Laguna Beach star, 28, and her close pals, including her Hills costar Lo Bosworth, Hannah Skvarla and Jilli Hendrix, went south of the border for a little pre-wedding fun as Conrad teased Thursday on Instagram: “Let the games begin #donttellmrtell.”

The outing got off to a sweet start with diamond ring-shaped cookies inscribed with “Lauren’s Bachelorette” in icing. Noted Conrad on Instagram of the adorable treat: “Almost too cute to eat Almost.”

The fashion designer, who heads her own Paper Crown line, is set to wed musician and law student William Tell after announcing their engagement in October. 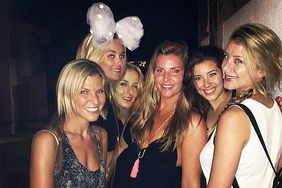 All the Details on Lauren Conrad's Bachelorette Weekend!