Lance Armstrong’s first professional race on European soil since winning his last Tour de France has proved tougher than anyone expected – the cyclist broke his collarbone in Spain Monday after crashing during the first stage of a five-day race.

Armstrong, who was caught in a pile-up about 12.5 miles form the stage’s finish in La Vuelta de Castilla y Leon, appeared to be in considerable pain as he was helped into an ambulance headed to the Rio Carrion hospital in Palencia, the Associated Press reports.

Doctors are determining whether Armstrong will need surgery, according to race spokesman Jacinto Vidarte. The injury could prevent the champ from racing competitively for four weeks.

Armstrong’s comeback after more than three years in retirement was already looking less than auspicious over the weekend. He placed only 125th on Saturday, and was racing as a 37-year-old competing against riders as much as 15 years younger than he is. He’d publicly called the three-day leg that began Monday “a true test to know where I am.”

Still, he encouraged fans to have realist expectations. “People think that somehow the same rider they saw in July, 2005 is miraculously going to be the same rider that they see again in March, 2009. It isn’t so,” he told reporters.

When Armstrong won his seventh Tour de France in 2005, he was considered among the finest riders to have ever competed, a recognition only burnished by the fact he won all but two after an astounding recovery from testicular cancer. In September 2008, he announced he was coming out of retirement and planned to compete in the 2009 Tour de France. 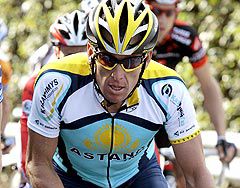 RESTRICTED: How I Raised a Champ