The songstress shares endless eye candy in her new clip

Lana Del Rey‘s new single is titled “Music to Watch Boys To,” but the singer puts her own physique on display in the video.

Rey, 30, dons a bikini for a swim with girlfriends in the dreamy clip. The eye candy doesn’t stop there – various scenes show the songstress lounging in a luxe backyard as her handsome man works his muscles on the basketball court.

Although the plot isn’t clear, there’s no denying this video pays homage to California – a staple of Rey’s work.

The new single follows up “High By the Beach,” the first release from Rey’s new album, Honeymoon.

It’s been an exciting year for Rey. Prior to releasing new music in August, she took a trip to Italy for the wedding of Monaco’s new royal couple, Pierre Casiraghi and Beatrice Borromeo, and inspired pal James Franco‘s upcoming book, Flip-Side: Real and Imaginary Conversations with Lana Del Rey. 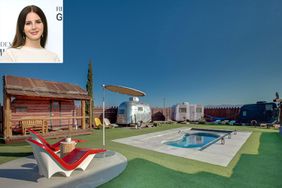