For most stars, head-to-toe latex bodysuits would be enough of an attention-grabbing look, but Lady Gaga takes it one step further with her signature hair bow while visiting a London radio station.

The singer shows off her effervescent side in April, performing in a custom-made bubble bodysuit that she says is based on a look by fashion-forward designer Hussein Chalayan (who's collaborated with Icelandic avant-garde singer Björk).

Where to look first – the checked parasol, the UFO-like hat or the thigh-high laced-up boots? The New York native leaves a UK TV appearance in one of her wackiest outfits to date, complete with Clara Bow-style lips.

You know your headgear is a bit much when air kisses prove dangerous! Ellen DeGeneres found herself dodging the rings of Gaga's Saturn-like headpiece while trying to greet the singer on a May episode of her talk show.

Gaga wears pants! Well, sort of – the singer slips into super-shredded leggings for a walk through the airport in New Zealand. Note the matching blazer and sunglasses – and the hair bow's back!

The platinum singer arrives to June's MuchMusic Awards in punched-out leggings, a cutout bandage top and hair reminiscent of Michelle Pfeiffer's in Scarface. Could the cutouts be an homage to the bullet holes of the classic film?

The singer hits the streets of Manchester, England, in July in the first of her tributes to the Muppets – an animal-festooned frock from designer Jean Charles de Castelbajac.

What to pair with an off-the-runway Alexander McQueen dress of knit ropes? Lace rabbit ears, of course! Stars like Lily Allen and Mary-Kate Olsen would later follow Gaga's lead, embracing their inner bunnies by donning ears.

Paying homage to the "Paparazzi" that she'd croon about in her fourth single, Lady Gaga steps out in Zurich in a newspaper-print suit.

GRIN AND BARE IT

Is she angling for a role in the next Twilight installment? The singer pairs her thong bodysuit and leather jacket with gleaming fangs for a walk through Heathrow Airport in August.

The singer mixes two of her favorite fabrics – latex and lace – for a retro-inspired look at the Monster Cable Party in Berlin.

Lady Gaga matches her green glasses to the stems of her bouquet – and puts the focus on her own stems in high-cut briefs and ankle-tie shoes while in Paris.

The singer hits the VMAs red carpet in September with Kermit the Frog as her date, but she really got tongues wagging with her Jean Paul Gaultier gown, elaborate neck brace and half-face mask. She would change five times that night alone!

The star meets up with her idol, Madonna, backstage at the Marc Jacobs spring fashion show – weeks before appearing together on Saturday Night Live.

She's fully clothed ... but but her gown is see-through and covered with hair! The singer takes the '70s staple, the caftan, to the dark side with a hairy neckline and peekaboo sensibility for the Billboard 4th annual Women in Music event in N.Y.C. in October.

of England, she still got tongues wagging with her red latex gown and 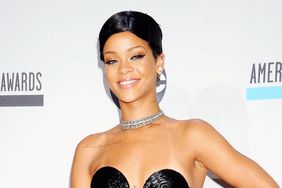 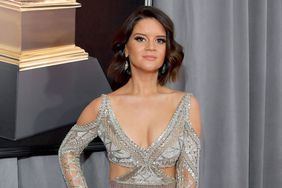