"Everyone was dancing until 2:30 a.m.!" says Herjavec of the starry July 31 nuptials

They do! Dancing with the Stars pro Kym Johnson and Shark Tank's Robert Herjavec walk down the aisle as husband and wife following their July 31 wedding at the Four Seasons Hotel Los Angeles at Beverly Hills. "When I met Kym, I felt complete. I'm so excited about everything we have to look forward to," Herjavec told PEOPLE.

Guests included a who's who of DWTS pros and stars, including Witney Carson (pictured), Donny Osmond and Lance Bass. One of the night's biggest hits was a coordinated dance with the entire bridal party to LunchMoney Lewis's "Bills," the first song Johnson and Herjavec cha-cha'd to on Dancing. "That part was a little stressful," Herjavec recounted the morning after the ceremony. "Nobody on my side is a dancer! But it was perfect."

Herjavec and his Shark Tank crew (from left), producer Clay Newbill, Barbara Corcoran, Lori Greiner and Daymond John. "I never thought I'd get married again," said the Croatian-born, Canada-raised billionaire businessman. "I worried I'd become bitter or an old cat guy. But at the end of the day everybody wants to connect to another human being. When I met Kym, it was just effortless."

Johnson had resigned herself to the idea of permanent bachelorette status after a decade of dating in L.A. "I had always imagined I'd be married before I was 30," she said. "There's a stigma that if you're single, it's like, 'Poor you.' I was happy with my life. I just wasn't ready to settle."

Potential disaster was averted during the ceremony, after Johnson unknowingly let the train of her Monique Lhuillier gown pass over a candle along the path as she walked down the aisle. "All of a sudden we smelled something," Herjavec recalled. "Then we looked and her dress was on fire!" Luckily Johnson's resourceful best friend stomped out the blaze, "before I went up in flames!"

Their first dance, to Etta James's "At Last," was a touching tribute to their Dancing roots. "We were given that song while we were on Dancing," said Johnson. "We were excited to do it because we were falling in love. But we were voted out before we could dance it. It's appropriate that it was our first dance as husband and wife."

Favors included Votivo's aromatic candles, and the reception itself was candlelit.

Herjavec surprised his Australian bride with a performance from one of her heroes, Olivia Newton-John. "I'm still in shock!" said Johnson. "Afterward we sang 'Let's Get Physical' together. It was like a dream!" For her part, Johnson surprised Herjavec with a performance by a local Croatian dance group as a tribute to his birthplace.

"We didn't want it to be stuffy," Johnson said of the sunset nuptials, held at the Four Seasons hotel in Beverly Hills. "We just wanted everyone to let their hair down and relax." 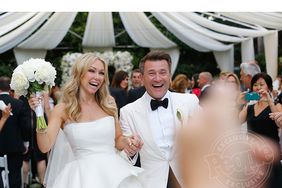