Australian singer Kylie Minogue and Paris-born actor Olivier Martinez have broken up after four years together, according to a statement released Friday.

“Olivier Martinez and Kylie Minogue have officially confirmed that they are no longer a couple,” says the statement issued by reps for the couple. “They have made it clear that the decision to go their separate ways was mutual and amicable. The two remain very close friends.”

The pop princess and Martinez are both, it says, “saddened by false [media] accusations of disloyalty.”

The couple’s parting follows reports that Martinez, 41, was seen with younger women in Los Angeles twice last week while Minogue, 38, remained in Britain.

The Australian entertainer is recovering from a respiratory infection, which caused her to cancel several concert dates in the UK last month. The gigs were part of her worldwide comeback Showgirl tour following her battle to beat cancer.

Minogue earlier this year credited Martinez, who appeared in Unfaithful with Diane Lane and Richard Gere in 2002, with helping her through the dark days of her breast cancer battle. She was diagnosed with the disease in May of 2005.

“He was always there, helping with the practical stuff and being protective,” said Minogue, who was given the all-clear last year. “He was incredible. He didn’t hesitate in canceling work and putting projects on hold so he could be with me. He’s the most honorable man I have ever met.”

Minogue began dating Martinez after they met at the Grammy Awards in 2003. After dining in Beverly Hills, Martinez drove her back to her hotel in his 1969 cream convertible E-type Jaguar.

Kylie Minogue: Boyfriend Got Me Through Cancer 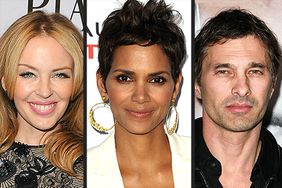