“I had to go the police station where I had an appointment at 9 p.m. to begin the process of being arrested,” she confirms.

Swanson was released on $500 (Canadian) bail. Officers escorted her into the police station in Kingston, Ontario, after Eisler’s ex, Marcia O’Brien, filed a complaint against Swanson.

Swanson, 37, claims she was attacked by O’Brien in front of Eisler and O’Brien’s children. The actress’s rep, Michael Sands, says Swanson plans to press charges against O’Brien, saying that police took photographs of her back and other parts of her upper extremities to document the injuries.

O’Brien declined to comment, except when asked if she attacked Swanson, she replied: “Why have I not been charged?”

Eisler, 44, a former world champion pairs skater, and Swanson, who starred in the big-screen version of Buffy the Vampire Slayer, met in 2006 while filming the FOX reality series, and their romance created a scandal in the skating community when Eisler left his pregnant wife for her. The pair welcomed a baby boy in February. 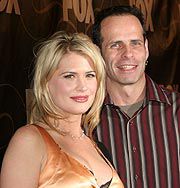 Kristy Swanson: 'I'm Not a Homewrecker'

'I'm Not a Homewrecker'