Kristin Cavallari won’t divulge whether she will be joining MTV’s The Hills, only saying that “it’s a great show.” But she’s already partying like the cast – celebrating her 21st birthday in Las Vegas.

The former Laguna Beach star marked the rite of passage at Luxor’s LAX nightclub, where she danced to Soulja Boy and hung with friends.

“My first official drink was Grey Goose and soda,” she said. “It’s really exciting. I can go to the clubs and not worry about anything.”

She was joined by fellow Laguna Beach alum Alex Murrel, and spent the night chatting up former flame Matt Leinart, who coincidentally was seated at an adjacent table in the VIP section.

Following her dinner at Company American Bistro, Cavallari’s highlight was easily the sparkling birthday cake that was brought out for her.

Saturday night capped the weekend-long celebration for the onetime Lauren Conrad rival. As soon as the clock struck midnight Saturday, the newly single Cavallari (she recently broke up with Nick Zano) headed to Pure Nightclub to take in the sights.

And what about the guys? Cavallari wouldn’t reveal details on her love life, only saying that she is dating “and having fun.” 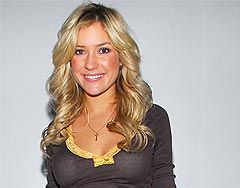