This time the star was on the sidewalk, not on Barney Fife’s chest. Veteran comedy actor Don Knotts, 75, received his star on the Hollywood Blvd. Walk of Fame yesterday, and besides a large crowd gathering to witness the event, standing at Knotts’s side was his ol’ TV sitcom pal, Andy Griffith. “When I got my star,” Griffith joked, “nobody showed up.” The two starred as Mayberry’s finest in the classic “The Andy Griffith Show” in the ’60s. Knotts revealed that his favorite episode on the show was “Barney and the Choir,” in which the perennially nervous sheriff’s deputy he played was forced to lip sync in the church choir because he couldn’t sing on key. “It was just a very funny show,” he said, adding that he believes that Barney Fife has endured over the years because he was “a very human guy, and he tickled people.” 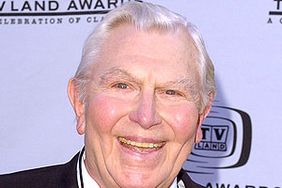 What It Is, Is the Tough Game of TV Ratings That Veteran Andy Griffith Is Playing Again