The 25-year-old says he's "so proud" of his sisters, but wants to be married before having children

Kim Kardashian‘s pregnancy announcement didn’t just shock her fans – it also came as a surprise to her family.

“I’m so proud of my sisters, but I’ll be married before I have a baby,” Rob Kardashian said while hosting the CIROC Vodka New Year’s Eve Countdown at STK Miami on Monday.

Expectant Kim, 32, is still going through a divorce after her 72-day marriage to Kris Humphries, while Kourtney – who is mom to Mason, 3, and Penelope, 6 months – is not married to her children’s father, Scott Disick.

But when asked about an impending proposal from West to his sister, Kardashian says, “I think everyone is just excited about and focused on the baby right now.”

As for how Kim broke the news to the reality television clan, she “told everyone individually,” the Arthur George designer says.

But Kardashian, 25, couldn’t be happier for the soon-to-be parents. “Kim and Kanye are over the moon happy,” he says. “I’m so excited to be an uncle again!”

While Kardashian says his rule is “married first” before starting a family, don’t expect him to settle down anytime soon. He spent the evening with friends in a private room upstairs where they had their own casino table, dealer and pool table.

As the night came to a close, Kardashian Tweeted at 7 a.m. “Goodnight. Happy New Year,” with a photo of the sun rising over Miami. 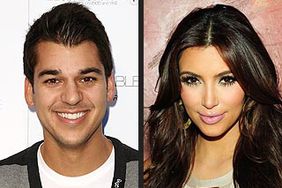