Even with 400 people, Kim Kardashian and Kris Humphries had to be careful to limit their wedding guest list.

So how did the bigger name celebs score the Lehr & Black-designed invites? Here’s a rundown:

Ryan Seacrest and Julianne Hough
The American Idol and KIIS-FM host wears another hat as executive producer of E!s Keeping Up with the Kardashians. He also attended Khloe Kardashian s nuptials to Lamar Odom. Seacrest, of course, brought along girlfriend Julianne Hough as his plus-one.

Eva Longoria and boyfriend Eduardo Cruz
The longtime pals hang out all the time – they even got ready together for this year’s Grammy Awards. Longoria brought along Cruz as her date and they sweetly kept close all night.

Demi Lovato
The two met at the White House Correspondents’ Association Dinner and have remained close. Kardashian was there for her in time of need as she was treated for “emotional and physical issues.”

Mark Ballas and Cheryl Burke
The bride asked her former Dancing With the Stars partner to help out with some moves for the first dance. It was only fitting that he was invited to the bash to see his work in action.

Ciara, Brittny Gastineau and Lala Anthony
All of Kardashian s BFFs made it to her special day and Gastineau even walked away with a special parting gift: the bouquet!

Lindsay, Ali and Dina Lohan
Old friends of the family through good times and bad the Kardashian clan has always been there to support. Kim and Lindsay have been pals since 2007 and Lindsay was on hand for the bridal shower.

Serena Williams
The two have been friends for years and Williams promised the bride tennis lessons as her gift to stay in shape for Humphries.

Vera Wang and Lorraine Schwartz
They dressed the bride in couture and diamonds and these two A-List fashion ladies were on-hand as guests and to help with any last minute fashion disasters. Thankfully, there weren t any!

Larsa and Scottie Pippen
Who knew Kardashian was so tight with the Real Housewives of Miami star? She s one of my best friends, says Kim. And Pippen and Humphries have a thing or two in common: Pippen was a basketball star for the Chicago Bulls.

E! News will air a two-part special, Kim’s Fairytale Wedding: A Kardashian Event, on Oct. 9 and 10, only on E!

For exclusive personal photos from Kim’s fairytale wedding and all the details, pick up the new issue of PEOPLE, on newsstands this week Click here for a special $1 off coupon 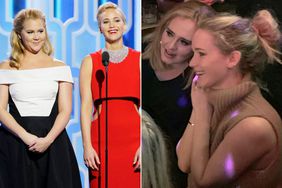 Jennifer Lawrence's Celebrity Wedding Guests: Who Attended & How They Know the Couple