The reality starlet tells a judge the marriage, which lasted 72 days, can't be saved

A marriage that lasted only weeks, then turned into a breakup battle that lasted for months, is officially going to end in divorce for Kim Kardashian and Kris Humphries.

The former couple reached a settlement, it was announced Friday in Los Angeles Superior Court.

“As a result of this agreement, we will not have a trial in this case,” Judge Hank M. Goldberg said. “I want to congratulate the attorneys on both sides. This is a sensible way to resolve this case.”

Kardashian, who appeared court wearing a black cocktail dress, black high heels and her hair down, appeared relieved as the judge indicated a divorce would be granted after both sides presented their confidential agreement.

Humphries did not appear for the brief hearing; his attorney showed up in his place.

After being sworn in, Kardashian was asked a series of procedural questions about the settlement, including whether her signature was valid and if she read the agreement.

At one point, Goldberg asked her: “Is there any way your marriage can be saved with counseling?”

“No, your honor,” she replied.

Kardashian, 32, filed for divorce in 2011 after a 72-day marriage. She’s now expecting a baby with boyfriend Kanye West.

Humphries, 28, had been seeking an annulment, alleging their lavish wedding was a sham staged for her reality show, Keeping Up with the Kardashians.

Kardashian had planned to testify and said she would also call Humphries, her mother Kris Jenner, a show producer and money people to talk about a prenup. 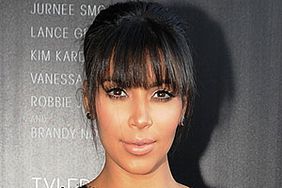