Khloé Kardashian kept her word and did her best to embarrass her sister Kim Kardashian at her bachelorette party in Las Vegas Saturday night.

Kim wore a pink sash labeled “Tao Bachelorette” and an illuminated tiara as she celebrated her rite of passage at Tao Las Vegas with traditional bachelorette accessories (straws and a cake shaped like a certain male body part) and remained a good sport while a miniature male stripper jumped on the dinner table to perform a strip tease.

“My sisters are doing everything they can to embarrass me,” Kardashian told the crowd that cheered for her and more than 20 party guests, including sisters Khloé and Kourtney Kardashian, mother Kris Jenner, pals LaLa Vasquez Anthony and Brittny Gastineau, who all wore red light-up rings on their fingers.

Her fiancé Kris Humphries, meanwhile, wasn’t far away, celebrating his bachelor party at Lavo Las Vegas with Kim’s brother Rob Kardashian, Lamar Odom and several NBA players. Donning a white T-shirt, Humphries downed shots and sang along to the deejay. But the singing stopped momentarily when a woman crashed the celebration. That woman was Kim Kardashian.

Though the couple had vowed not to see each other on their bachelorette/bachelor weekends, Kardashian headed to Lavo around 2 a.m., surprising Humphries at his VIP booth. After getting over the shock of seeing his fiancée on guys’ night, Humphries kissed his future bride delicately before picking her up to smooch her in full view of the club. Kardashian and her crew mingled with Humphries and his group for about 10 minutes before departing and leaving the men alone.

The couple is scheduled to celebrate again separately on Sunday in Las Vegas. 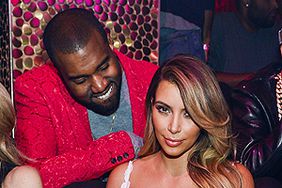 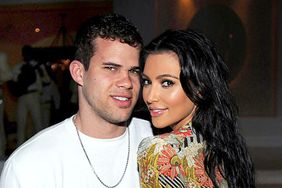 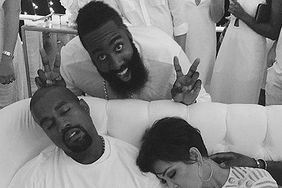 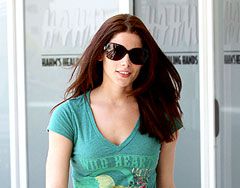