"You know, I'm a free man, right, ladies?" he tells the crowd at his House of Blues show

If Kevin Federline is a man mourning the demise of his marriage, he didn’t show it onstage at Chicago’s House of Blues Wednesday night.

Playing the role of a rap Casanova, Federline, who is seeking sole custody of his kids with Britney Spears, leaned into the crowd to touch the hands of women who were reaching toward him. Several songs into the set, he referenced his breakup with Spears. “Hey, I see a lot of fine ladies in here,” said the rapper. “You know I’m a free man, right, ladies? You wanna dance with a pimp?”

Federline kept his spirits up throughout the performance before a standing-room-only audience (tickets were being given away free), though he addressed the “haters” from the stage, as a few audience members heckled him.

Still that didn’t stop him from getting his newly single status across yet again: “All my ladies,” he said from stage, “I love you to death!”

After the show, Federline lived up to his party boy reputation, by stopping by the Chicago hot spot, Cabaret, where he arrived just after midnight. He was escorted to a VIP section where he chatted up his entourage and danced to the thunderous music – cigarette in hand – rapping aloud when his own songs were played.

People packed the small VIP section; those who weren’t allowed inside crowded around it. Federline didn’t budge from the corner he occupied until just before 1 a.m. when three fans, shouting and waving at him, got his attention. He declined their request to join them on the dance floor, but did sign the three CD jackets they handed to him.

“He signed my name wrong, but I don’t care. Oh my God, I love him,” said Colleen Harvey whose Federline autograph read: “To Kelly Thanx 4 tha support F— the media KF”

Around 1:25 a.m., Federline took over the microphone: “Ladies if you’re drunk, let me hear you scream!” he shouted. Later he added, “I represent the g–damned West Coast.”

When the crowd thinned out, Federline ordered champagne for the DJ booth, drank Jack Daniels from the bottle and let friends try on his many gold chains. “It’s a party for K Federline. Gonna rock and roll,” he announced.

After leading the remaining crowed in an expletive-filled chant against the media, Federline reminded everyone that he’s unattached: “He said he’s a single man. He’s looking for ladies,” Harvey said. 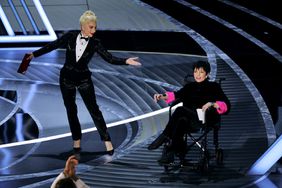 Kevin Gets 'Fire' d Up in NYC – Without Britney 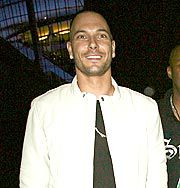