Kevin Federline traveled to Las Vegas for work – to shoot his “Lose Control” video – but, with wife Britney Spears in tow, managed to find time for fun.

On Saturday, Federline, who will perform “Lose Control” at the Teen Choice Awards on Aug. 20, filmed the video for the song at Pure Nightclub at Caesars Palace.

Once the video had wrapped at around 10:30 p.m., Pure opened to clubgoers and Federline and his crew stayed to celebrate. Spears, who is expecting the couple’s second child this fall, stopped by shortly after midnight and received a hug and plenty of attention from her husband, an observer tells PEOPLE.

After half an hour of canoodling, Spears headed to Tao at the Venetian with a few girlfriends and watched the dance floor from a private perch, while at Pure, Federline took center stage, emceeing from the DJ booth. And he knew how to work the crowd – “Lose Control” was played four times, and by the final spin, the crowd was chanting along. 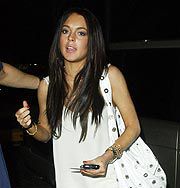