A mere two weeks after Kelsey Grammer was granted a divorce from Camille Grammer, the actor tied the knot with Kayte Walsh on Friday in New York City.

Grammer, 55, and Walsh, 29, exchanged vows during an afternoon ceremony at the Longacre Theater in New York City, where the five-time Emmy Award-winner recently starred in the Tony-winning revival of the musical La Cage aux Folles.

“Kelsey Grammer and Kayte Walsh were married today at a private ceremony for family and friends,” his rep said in a statement.

David Hyde Pierce, who played Grammer’s brother on the long-running series Frasier, told PEOPLE as he was exiting the ceremony, “It was wonderful!” Actor Alan Arkin, also a guest at the wedding, added that the couple looked “very much in love” as they tied the knot.

Following the ceremony, the newlyweds and their guests headed to the reception at the Plaza Hotel, where celebrity event designer Ed Libby transformed the Grand Ballroom into a mix of Hollywood glamour and uptown sophistication, with hundreds of candles, lavish floral arrangements of blush pink and white roses and tulips and a long, regal table where the newlyweds were seated.

The celebration is scheduled to go late into the night at the Plaza, where Libby planned to transform the ballroom into a stylish club with gold lounge furniture, cocktail tables, a dance floor – and a buffet to include braised beef short ribs, poached shrimp and a grand 55-inch-tall carrot cake made by Sylvia Weinstock with caramel cream cheese frosting and decorated with handmade ivory sugar roses.

This is the fourth marriage for Grammer, who announced his engagement to Walsh in December. 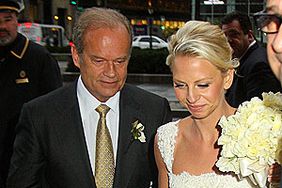 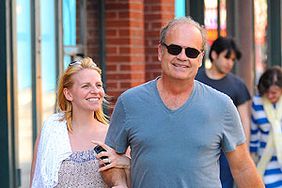 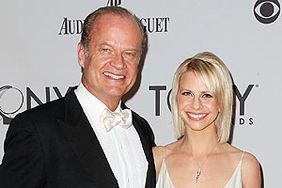 Kelsey Grammer: My Son Wants Me to Have More Kids 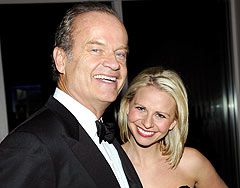