Daniel Giersch, in a custody fight with the Gossip Girl star, denies he's threatened or harassed her

Rutherford alleges the German businessman “has begun to follow me, my mother and my nanny and he shows up unexpectedly to threaten and scare us,” says the order, which is in effect for 21 days pending a court date to hear evidence.

“Daniel will remain focused on co-parenting both of their children and not make any personal comments in order to continue to protect the children’s need for privacy and well being,” says Hallin.

In the documents, Rutherford’s nanny Michaela Kothanova claimed that Giersch so unnerved her during custody exchanges that she quit. The nanny claims Giersch threatened to sue her after she refused to answer his repeated questions about Rutherford.

Rutherford’s mother, Ann Edwards, alleges that Giersch once appeared inside a restaurant where she was eating with his son, Hermes, 2. “Daniel was blocking our way out of the restaurant,” she claimed, adding that he showed up in a store the following day where Rutherford, Edwards and Hermes happened to be.

A lawyer for Rutherford did not return calls for comment.

The estranged couple have been locked in an ongoing custody battle over their son and daughter Helena, 3 months. A hearing date is set for Oct. 15. 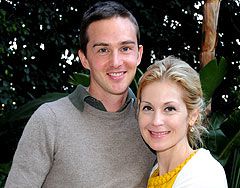