Kelly Ripa left the set of Live with Regis & Kelly halfway through Tuesday morning’s telecast, and Regis Philbin explained later in the show that she had not been feeling well.

The program was being broadcast outdoors from the Atlantis resort in the Bahamas. Early on, Ripa seemed uncharacteristically low-energy and sipped frequently from a drink on the cohosts’ table. She made it through the opening segment and an interview with Project Runway judge Tim Gunn, but did not return after the halfway mark of the show.

Philbin interviewed the Jonas brothers by himself, and with about 10 minutes left in the program, he told viewers, “Kelly [is] a little bit under the weather right now. We hope she’ll be back before the show is over.”

She did not return.

Ripa’s rep, Stan Rosenfield, said in a statement, “It’s a little case of the flu and she didn’t do the second show. That’s all. It’s holiday season and it’s flu season, even in the Bahamas.”

Live is broadcasting all this week from the Paradise Island resort.

Later, Philbin told Extra, “I thought she was pretty brave to come out and try to finish the whole show, but under the sun and everything, I guess she got a little warm.”

Ripa is expected back on the show Wednesday. 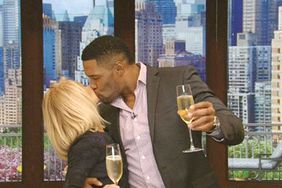