The songstress has been performing killer covers for years

Recently, the world has been taking notice of Kelly Clarkson‘s spine-tingling renditions of songs originally released by other artists. But the native Texan has been slaying the cover game since she rose to fame as the original American Idol in 2002.

To honor the queen of the cover, 33, we put together a list of her most unforgettable spins on beloved tracks.

For Lifetime’s 2006 Women Who Rock concert, Clarkson owned the stage with her take on Aerosmith’s “Cryin,” proving she could rock with the best of them.

At a 2012 performance in Eminem’s hometown of Detroit, Michigan, Clarkson took on the rapper’s 8 Mile classic “Lose Yourself.” The songstress showed that even stepping into the rap world is no big deal for her, flowing through the verses with ease.

Also in 2012, Clarkson let a Virginia crowd know exactly what kind of guy can’t get no love from her. She strutted her stuff to the TLC favorite “No Scrubs.”

Covering an Adele song would intimidate even the world’s best singers, but not Clarkson. She nailed “Someone Like You” at a tour stop in Australia.

Y’all should know her well enough. Obviously, Clarkson was destined to kill it when she swung by BBC Radio 1’s Live Lounge to perform a piano-backed version of Rihanna’s “Bitch Better Have My Money.” And it wasn’t the only time the former American Idol covered RiRi.

In July, Clarkson reminded us that she’s fabulous at covering Taylor Swift songs, and Swift agreed. But let’s not forget about October, when Clarkson slowed down “Shake It off,” turning it into a bluesy wonder. Swift, of course, thought she “slayed.”

At another flawless stop on her “Piece by Piece” Tour, Clarkson sang Nick Jonas’s “Jealous” to the delight of her audience at Radio City Music Hall.

Clarkson was clearly nervous about taking it back to the ’80s to pay tribute to Prince’s legendary track “Purple Rain,” but as soon as she belted the first note, it was clear she had nothing to worry about it. The Minneapolis crowd, and everyone else, loved it.

In Albuquerque, New Mexico, in August, Clarkson obliged fans who requested the Dolly Parton classic “Jolene.” The result was a haunting, stripped down, twangy tribute that more than did justice to the original.

Before spilling the beans about her pregnancy at the Staples Center in Los Angeles, Clarkson honored “her girl” Demi Lovato’s birthday by covering her timely hit “Cool for the Summer.” The 23-year-old pop star is a longtime, “so supportive” fan of Clarkson, and, as the “Heartbeat Song” singer said on stage, is totally “killing it” right now. Also killing it? Clarkson. 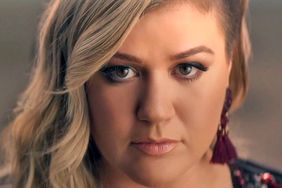