Keith Urban: Nicole Kidman Is a 'Ray of Sun'

To get a sense of Keith Urban and Nicole Kidman’s marriage, give his new album a listen.

“There’s a handful of songs on the record that were inspired by her and by the way my life changed when we met – so much for the better,” Urban tells the German magazine Stern in a new interview. “She was a good ray of sun in my life. I didn’t intend to write any songs about her. I just wrote, and obviously what was coming out was how I was feeling.”

The record, Love, Pain & the whole crazy thing, was released while Urban was undergoing a 90-day treatment for alcohol addiction. He left rehab this month, and credits Kidman for helping him handle the ordeal.

“We’ve gone through a lot in the last three months,” he says, “and I think it’s been the strength of our marriage (that) has carried both of us through.”

Urban dismisses rumors that surfaced while he was in rehab that he’d had an affair with a lingerie model while he and Kidman were dating.

“I know and God knows where my heart is at,” Urban says. “I waited 39 years before I got married. It means everything to me to be married. Like everybody, I really want to do it only once. I’m very loyal in that respect, and committing to somebody means once that ring is on, I’m gonna stay.”

The country singer says he and Kidman, both 39, would also love to have children – “when the time is right.” For now, he’s itching to get back on stage.

“I spent six months working on an album, and you know, I was in rehab when the record came out,” he says. “So I am really looking forward to finally performing.” 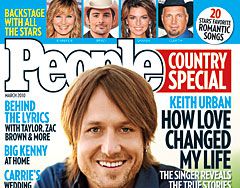