The couple, who got engaged last September after dating for two years, tied the knot in the backyard of Couric’s home in front of 50 friends and family.

“We wanted to keep the wedding just very low-key,” Couric, 57, told PEOPLE before the wedding. “This is not my first rodeo so I didn’t want to go too crazy and neither did John.”

The ceremony, which Couric says had “traditional touches,” featured readings by Molner’s children, Allie and Henry, as well as Couric’s daughters with late husband Jay Monahan, Ellie, 22, and Carrie, 18. Couric’s youngest daughter also sang for the couple, Molner’s nieces were flower girls and there were two ring bearers.

The bride wore an ivory beaded and embroidered Chantilly lace halter gown by Carmen Marc Valvo that she’d finally decided on just one week before the wedding.

And bucking with tradition, she’d asked her groom to help her make the final decision. “I hope this isn’t bad luck but I actually tried it on for him,” she admitted. “I tried on a number of dresses and I was so busy, I had a crazy spring.”

Over the past couple of months, Couric wrapped up her talk show, embarked on her new role as a Yahoo! News Global Anchor, released a documentary, Fed Up, and celebrated her daughter Carrie’s high school graduation.

In fact, she was so busy that Molner, 51, ended up involved in a lot of the wedding planning. 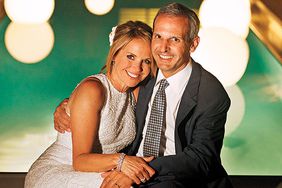 Katie Couric's Jewelry From Her Wedding to John Molner: All the Scoop!