Talk about a labor of love! Katie Couric celebrated the holiday weekend in style by getting engaged.

PEOPLE has learned that the TV host, whose talk show Katie returns for a second season on Sept. 9, ecstatically accepted a proposal from her boyfriend of nearly two years, banker John Molner, 50.

A rep for Couric confirms the engagement – Molner popped the question with a spectacular diamond ring at sunset on the beach in East Hampton, N.Y.

A widow since her husband Jay Monahan died from colon cancer in 1998, Couric, 56, has had several suitors over the past decades, but never seemed to find “The One.”

“When the girls were really little, I always imagined I would be modern-day Carol Brady,” Couric told PEOPLE in 2011 about her years raising daughters Ellie, 21, and Carrie, 17, on her own while hoping for a second trip down the aisle.

Finally, though, the star decided to stop fretting about finding a husband.

“I used to worry a lot about the future. [But] who knows what it will bring?” she said. “Hopefully it will bring good things.”

Now her wish has come true. Couric and Molner, who is head of mergers and acquisitions at Brown Brothers Harriman, first went public with their romance in April 2012. Couric confessed to the press later that year, “He’s great. He’s from Chicago. I love Midwesterners!” 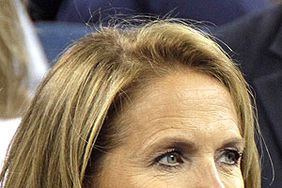 Katie Couric Flashes Her Engagement Ring at the U.S. Open