Actress Kate Winslet is speaking out against Harvey Weinstein amid allegations of decades of sexual misconduct.

“The fact that these women are starting to speak out about the gross misconduct of one of our most important and well regarded film producers, is incredibly brave and has been deeply shocking to hear,” Winslet said on Monday in a statement to Variety.

“The way Harvey Weinstein has treated these vulnerable, talented young women is NOT the way women should ever EVER deem to be acceptable or commonplace in ANY workplace,” Winslet, 42, added.

“I have no doubt that for these women this time has been, and continues to be extremely traumatic. I fully embrace and salute their profound courage, and I unequivocally support this level of very necessary exposure of someone who has behaved in reprehensible and disgusting ways,” Winslet continued. “His behaviour is without question disgraceful and appalling and very, very wrong. I had hoped that these kind of stories were just made up rumours, maybe we have all been naïve. And it makes me so angry. There must be ‘no tolerance’ of this degrading, vile treatment of women in ANY workplace anywhere in the world.”

Winslet — who won an Oscar in 2009 for her role in The Weinstein Company’s The Reader — joins fellow actresses Meryl Streep, Judi Dench, and numerous other women and men in Hollywood condemning the movie mogul.

“The disgraceful news about Harvey Weinstein has appalled those of us whose work he championed, and those whose good and worthy causes he supported,” said Streep in a statement on Monday. “The intrepid women who raised their voices to expose this abuse are our heroes.”

On Sunday, Weinstein was removed from his powerhouse film studio in the wake of the publication of the allegations in a New York Times report.

In the NYT article, eight women — including actress Ashley Judd — spoke out against Weinstein, accusing him of sexual harassment and inappropriate behavior.

Weinstein responded to the allegations in the report, saying he’s working with a therapist to address his issues head-on. “I appreciate the way I’ve behaved with colleagues in the past has caused a lot of pain, and I sincerely apologize for it,” he said. “Though I’m trying to do better, I know I have a long way to go.”

The mogul’s then-attorney Lisa Bloom said in a statement that her client “denies many of the accusations as patently false,” though Weinstein said that he “bear[s] responsibility for my actions” in an interview to The New York Post on Friday. Another lawyer for Weinstein, Charles Harder, said the mogul has plans to sue the New York Times. (Bloom announced she was resigning from advising Weinstein on Saturday afternoon.) 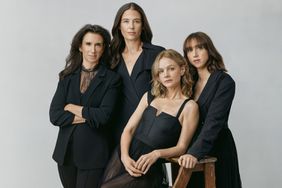