Kate Moss has had plenty of practice walking down runways – but when it comes to walking down the aisle, the supermodel had her first experience on Friday.

Moss, 37, tied the knot with fiancé Jamie Hince near her Cotswold, England, home. Police monitored roads surrounding the model’s home, which was barricaded for the festivities. Celebrations will continue there over the weekend, for a days-long party dubbed by the media as “Mosstock.”

Following a ceremony at St. Peter’s Church in Southrop, the bride and groom posed for pictures with her 12 bridesmaids, including her daughter Lila Grace, 8.

The couple’s mutual friend Sadie Frost first introduced Moss to The Kills rocker backstage at his concert in 2007. They were engaged in Feb. 2011.

This engagement is not a first for Moss, who split from troubled rocker Pete Doherty shortly before she met Hince.

Kate Moss Marries with Lila Grace By Her Side 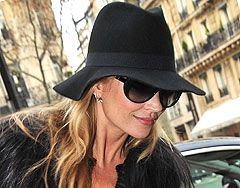 Kate Moss Is Engaged to Marry