From the gardens of Singapore to good works in Malaysia, the Duke and Duchess of Cambridge bring the Diamond Jubilee celebrations abroad

Following their arrival in Singapore a day earlier, Prince William and Catherine, Duchess of Cambridge, visit a public housing estate on Sept. 12 in Strathmore Green, where a lion dance performance kicks off their tour of the Queenstown district.

While there, the Duchess mingles with a young fan, who presents her with a token of her affection.

William, meanwhile, takes a moment to read through a 1953 newspaper clipping marking his grandmother's coronation. "[It was] a very long flight, but we're so happy to be here," he says of the couple's eight-day visit to Southeast Asia to mark the Queen's Diamond Jubilee celebration.

After seeing the city's famed orchids, the Duke and Duchess also explore Singapore's Gardens in the Bay, where William reveals to a member of the crowd that he'd like to have two children some day.

"Try not to break any engines," William quips as his wife playfully flexes her muscles before giving one of the engines produced at the Rolls Royce factory in Seletar a spin.

UP IN THE AIR

That same day, the prince puts his own arm strength on display while playing toss with students from the Rainbow Center, a school for children with special needs.

Cheers to that! Husband and wife clink glasses in a toast to Queen Elizabeth's Diamond Jubilee to end the evening. Their final event of the day, a dinner reception, was held at Eden Hall, the official residence of the U.K.'s High Commissioner to Singapore.

The Duchess flies solo for her first speech abroad, which she gives at their next stop in Kuala Lumpur in honor of the staff at Hospis Malaysia on Sept. 13. "Providing children and their families with a place of support, care and enhancement at a time of great need is simply life-changing," she says, drawing applause from the room and a beaming William.

In a contest of artistic ability, the couple sketches drawings into clay tiles that will later be displayed at the Hospis, with Kate replicating a tree and William drawing his version of the cartoon characters Tom and Jerry.

– For the latest travel photos and updates on Prince William and Duchess Catherine, check out PEOPLE on Twitter! 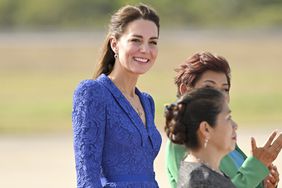