Kate, Pippa and mom Carole aren't above shopping each other's closets! See the stylish pieces that have popped up on multiple Middletons

To give her first solo speech as a royal on March 19, the Duchess of Cambridge chose Reiss's "Trina" dress – the same style her mother Carole wore for the Royal Ascot in 2010.

At Wimbledon in 2008, Kate donned a white Issa "Lucky" dress, paired with a black cardigan. Three years later, sis Pippa wore the same frock, but with a red purse and matching flats while out in London.

For a friend's wedding last September, Kate dressed up a Collette Dinnigan red lace dress with a festive fascinator and black pumps; her mother wore the lace number two years earlier for the Royal Academy's Summer Exhibition in 2009.

While lunching in London with stepmother-in-law Camilla in February 2011, Kate topped her black-and-tan dress with this beige jersey knit jacket from Whistles. Fast forward to three months later, Pippa wore it on top of a patterned frock while running errands in the same city.

A tip of the hat to Kate, who worked her Jane Corbett fascinator for a pal's 2009 wedding – a year before mom Carole paired it with her blue Reiss "Trina" dress at the Royal Ascot.

Pippa was first to carry this Wilbur amp Gussie gold "Edith" bag (to London's Boodles Boxing Ball in October). Just one week later, Kate (also in red) got ahold of the golden bag for the 100 Women in Hedge Funds gala at St. James's Palace.

Kate's love for her nude L.K. Bennett is widely known, but both Carole and Pippa have been spotted in very similar styles while socializing around London.

To christen a lifeboat in Anglesey, Wales, last February, Kate chose a neutral Katherine Hooker coat – the same one Pippa then wore to a friend's December 2011 nuptials in Suffolk. 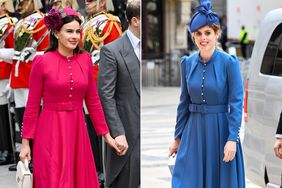