Swift "declined and cautioned him about releasing a song with such a strong misogynistic message," according to her rep

Taylor Swift was as shocked as her fans were to hear about Kanye West‘s rap diss.

In fact, Swift’s spokesperson tells PEOPLE, “Kanye did not call for approval, but to ask Taylor to release his single ‘Famous’ on her Twitter account,” adding, “She declined and cautioned him about releasing a song with such a strong misogynistic message. Taylor was never made aware of the actual lyric, ‘I made that bitch famous.'”

TMZ reported earlier that the rapper had directly contacted Swift, 26, “late last month” during which she “said she got the joke and gave him the thumbs up to release the song with the lyric.”

West, 38, released his new album, The Life of Pablo with a grand listening party/Yeezy fashion show at Madison Square Garden on Thursday which was streamed live to over 20 million people via Tidal, according to early viewership numbers.

The 1989 hitmaker has yet to address the “Famous” lyrics on social media but her celebrity BFFs Jaime King and Gigi Hadid – both of whom were in attendance at MSG – did defend Swift on Twitter.

“I’m so sad right now & disappointed right now. I stand by my sister. Always,” King tweeted while Hadid wrote, “My attendance somewhere does not mean I agree with everything being said in the music playing there. My friends know of my loyalty.”

Swift’s brother Austin also shared his reaction with fans by posting a video of him trashing his Yeezy 350 Boosts. 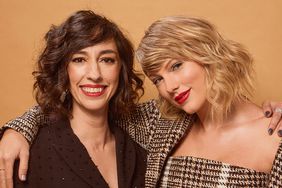