The rapper crashes the stage when he doesn't win best video

But unofficially, he was also named biggest sore loser.

The six-time Grammy-winning rapper, 29, was apparently so disgruntled at not winning best video for “Touch The Sky” – the prize went to Parisian duo Justice vs. Simian for “We Are Your Friends” – that he crashed the stage as the award was being handed out.

In a profanity-laced tirade, West said he should have won the prize, because his video “cost a million dollars, Pamela Anderson was in it,” and, he added, “I was jumping across canyons.”

“If I don’t win, the awards show loses credibility,” West said, according to the Associated Press. Later, he said, “I had the best video. ‘Touch the Sky’ was a great moment in TV.”

• As this year’s Grammys approached, he appeared on the cover of Rolling Stone wearing a crown of thorns, and later said he’d “really have a problem” if he didn’t win album of the year for Late Registration. (He lost to U2’s How To Dismantle An Atomic Bomb.)

• After losing the favorite breakthrough artist award to Gretchen Wilson at the 2004 American Music Awards, West told reporters, “I was robbed. … I was the best new artist this year,” and “I got 10 Grammy nominations, and won three – even if I should have won all 10.” 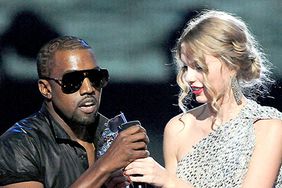