The couple made their red carpet debut at the 65th Annual Emmy Awards on Sunday, with the actress wearing an oxblood-colored dress by Vera Wang.

On Friday, Cuoco, 27, called Sweeting the “greatest date ever” on Instagram, sharing a cuddly photo of the pair.

“He is an amazing guy,” a source tells PEOPLE. “She is so happy.”

Sweeting, 26, later shared a sweet snapshot on his Instagram account writing, “A million people, all I see is her @normancook #emmys”

• Reporting by AILI NAHAS//storify.com/peoplemag/kaley-cuoco-is-engaged-to-ryan-sweeting.js?header=none&template=slideshowView the story “Kaley Cuoco Is Engaged to Ryan Sweeting” on Storify 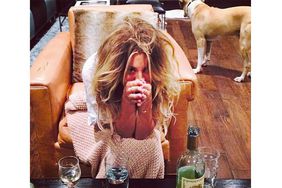