Leonardo DiCaprio was set to host a fundraiser for presidential hopeful Hillary Clinton, but due to a scheduling conflict, he had to bow out – luckily, pal Justin Timberlake had his (sexy) back.

“Leonardo DiCaprio was scheduled to host a fundraiser with Hillary Clinton on Tuesday at his home in L.A.,” a source close to the event tells PEOPLE exclusively. “Unfortunately, Leo is stuck in New York until Wednesday to finish his current project.”

So naturally, the Oscar winner phoned up his famous friends to take his place.

“Not wanting to leave Hillary hanging, Leo called his friends Justin and Jessica Biel and asked if they would host for him. They immediately agreed to fill in as hosts and moved the event to their home for Tuesday,” the source adds.

The change of plans comes as DiCaprio, 41, is producing the documentary Before the Flood. The film – which is expected to premiere at the Toronto International Film Festival on Sept. 9 – focuses on the effects climate change have on endangered species, ecosystems and native communities; it will feature President Obama, Bill Clinton, Secretary of State John Kerry, United Nations Secretary-General Ban Ki-moon and Pope Francis.

DiCaprio is a fervent supporter of the Clinton campaign. In June, he attended another star-studded fundraiser at entertainment exec Harvey Weinstein’s New York home. 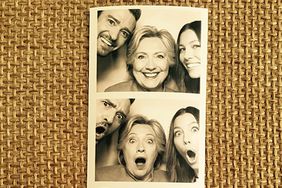