"She's beautiful," he tells Oprah, and "the most compassionate person I've ever met"

Drew Barrymore has a way of making the expression “best friends” sound like something a lot more than that – especially when she and boyfriend Justin Long showed up on Oprah Winfrey‘s show Monday fresh out of the shower.

“We used the hotel shampoo,” a giggling Barrymore, 33, told Winfrey, explaining why she smelled so good.

The talk host already deciphered why the actress-producer emanated a special glow: it was because of Long, who sat in the audience.

His hair was wet, too.

“She smells good,” Long, 29, told Winfrey when she asked what he liked about Barrymore. “She’s beautiful,” he said, “and funny. The most compassionate person I’ve ever met.”

In reciprocation, Barrymore, explaining that “when you grow up you decide what you want to be,” said her relationship with Long was “healthy, productive, supportive and full of humor.”

In all, she said, they’re having an “excellent time.”

Barrymore’s epiphany of growing up and deciding what she wanted to be led her toward philanthropy, the current Vogue cover girl said, as she also announced her $1 million charitable donation to the World Food Programme, to help feed children in Africa.

“We have a dream,” said WFP Executive Director Josette Sheeran, who accepted the check from Barrymore on the show, “to feed another 10 million hungry school children in Africa by Thanksgiving Day.”

Also making an appearance – over the phone – was Barrymore’s best friend, whom she calls “Poo”: Cameron Diaz.

“I’m choked up,” said the actress, “and so proud of this information [Drew]’s giving the world.” 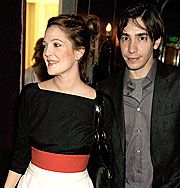 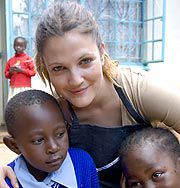