Amazing things happen when you put Martha Stewart, Kevin Hart, Will Ferrell and countless other celebs in the same room, all united around the same cause: skewering the Biebs

BOYS WILL BE BOYS

The man of the hour fraternizes with the enemy – comedians Blake Anderson and Anders Holm – before his merciless skewering in L.A. on Saturday night.

Meanwhile, comedian Jeff Ross arrives at the roast decked out in pope attire and surrounded by a posse of nuns (however, we're guessing none of them are actually part of the clergy).

Inside, mustachioed Anchorman newscaster Ron Burgundy – played by the ever-straight-faced Will Ferrell – struggles to "keep it classy" as he doles out a series of burns. Of the Biebs' recent friendships, Burgundy asked, "What's more classy than hanging out with Floyd Mayweather?"

Stand-up comic and actor Chris D'Elia – Bieber's favorite comedian – is physically unable to contain himself on stage during the roast (let's hope we feel that way when we watch it on Comedy Central on Monday, March 30).

We can't handle all this cute! An adorable monkey (remember him from when he was quarantined in Germany in 2013?) manages to out-adorable the newly minted 21-year-old.

Also on hand, randomly: Martha Stewart, who goofs around before taking serious jabs at Bieber. However the domestic diva was not safe from the satire: Jeff Ross joked, "A lot of people are upset that Justin hasn't won a Grammy. There is Martha Stewart. She can be your grammy."

In an unusual public appearance, comedian Dave Chappelle has a blast in the audience, a safe (and likely strategic) distance away from all the burning action, considering even the roasters were roasted.

But pals Kevin Hart and Shaquille O'Neal may be having the best time of everyone. Before the show, Hart promised he wouldn't try to make Bieber cry – though he clearly can't prevent himself from crying (of hilarity).

On stage mid-roast, Bieber shows he can roll with the punches, though he definitely didn't emerge unscathed. "Damn, you guys were brutal," he said after the attacks wound down. "This was supposed to be a birthday present."

The night before the season premiere of Keeping Up with the Kardashians, sisters (and apparently devout Beliebers) Kendall Jenner and Kourtney Kardashian show up to watch their friend get destroyed.

PEAS IN A POD

Our favorite unlikely friendship – between Stewart and Snoop – is on full display as the two giggle uncontrollably. At one point in the show, comedian Natasha Leggero commented, "All these rappers on stage and Martha Stewart has done the most jail time."

Naturally, the roast after-party heats up with a giant graphic of shirtless Bieber covered in flames (and tattoos, because he's tough now). 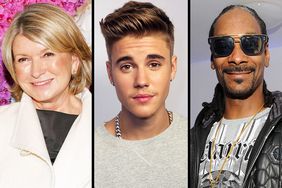