Josh Groban‘s new album Stages showcases the singer’s powerful voice with a series of appropriate vehicles: Covers of musical theater chestnuts from musicals like Les Misérables, Into the Woods and Carousel.

And when you add Kelly Clarkson to the equation, you’re bound to come away with gold, which is exactly what fans have with this version of The Phantom of the Opera‘s “All I Ask of You.”

On Stages, Groban also shares the spotlight with Chris Botti (on “Old Devil Moon” from Finian’s Rainbow) and Audra McDonald (on “If I Loved You” from Carousel). Listen to Groban and Clarkson’s beautiful duet below: 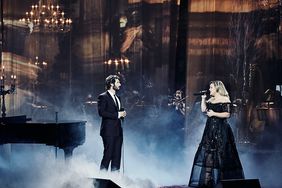