Former schoolteacher John Mark Karr was arrested in Thailand Wednesday as a suspect in the death of JonBenet Ramsey, the 6-year-old Boulder, Colo., girl killed in 1996.

The 41-year-old, who is already wanted in California for possession of child pornography, said at a press conference in Bangkok on Thursday, “I was with JonBenet when she died.” Visibly nervous and stuttering as he spoke, Karr added, “Her death was an accident.”

However, questions arose about Karr’s story when his former-wife, Lara, told KGO-TV in San Francisco that she was with Karr in Alabama the entire Christmas season when JonBenet was killed. The little girl was found beaten and strangled in the basement of the family’s home in Boulder, Colo., on Dec. 26, 1996.

Karr spoke about the killing after he was arrested Wednesday at his downtown Bangkok apartment, Lt. Gen. Suwat Tumrongsiskul, head of Thailand’s immigration police, told the Associated Press.

After his news conference, an expressionless Karr declined to tell reporters what his connection was to the Ramsey family or how long he had known JonBenet. Yet asked if he were innocent of the crime, Karr said, “No.” He also said, as police escorted him past reporters, “I loved JonBenet, and she died accidentally.”

Boulder District Attorney Mary Lacy, in a separate news conference Thursday, said that Karr will remain in custody pending the ongoing investigation of the case, and that no charges will take place until all the evidence is in. She declined to discuss what evidence led to Karr’s arrest.

Lacy said that Karr was arrested at approximately 6 a.m. Wednesday in Bangkok, where he was living and had begun his employment as a second-grade school teacher the day before. She added that there is “much more work to be done now that the suspect is in custody.”

Karr is expected to be extradited to Colorado soon, where he could face a variety of charges, including first-degree murder, first- and second-degree kidnapping and child sexual assault, Ann Hurst, Department of Homeland Security attach at the American Embassy in Bangkok, said at an earlier press conference. Hurst said Karr has been “very cooperative” with authorities and that he’s shown a “variety of emotions.”

An attorney for the Ramsey family said Wednesday that Karr once lived near the family in Conyers, Ga.

Karr’s father told the Denver Post that his son had been deeply interested in the JonBenet case and had researched a book on the subject.

For years, JonBenet’s parents, John and Patsy Ramsey, remained under what Boulder authorities termed an “umbrella of suspicion,” although the Ramseys insisted they were innocent.

Patsy Ramsey died of cancer in June. But John Ramsey said in a statement Wednesday that she “was aware that authorities were close to making an arrest in the case, and had she lived to see this day, would no doubt have been as pleased as I am with today’s development almost 10 years after our daughter’s murder.”

He added, in comments broadcast on Thursday’s Today show, “what police did is beyond impressive.” 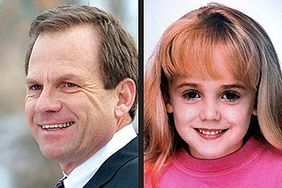