The host's attitude is, "We're mice being chased by a cat. Let's just do it"

Likely to be in a tux when he assumes his emcee duties at Sunday night’s Oscar ceremony, Jon Stewart was recently found unshaved and sporting army boots in the nether regions of Hollywood’s Kodak Theatre – prepping for the job ahead.

“This is an exercise in battle stations,” the Daily Show host, who just survived the three-month writers’ strike, tells The New York Times about his upcoming weekend job. “In some ways it allows your mind to be in that fight-or-flight mode the whole time: ‘Okay, we’re mice being chased by a cat. Let’s just do it.’ “

Had the strike not been settled, says Stewart, 45, he would have told Oscar-show producer Gil Cates not to have expected him at the podium. “Gil and I have a good relationship, and I just said to him, ‘I want you to know that I consider the Oscars to be an elective,’ ” says Stewart – who would have elected to pass.

But now that he’s back in the saddle (after having hosted the Oscars two years ago), Stewart realizes the daunting task before him.

“The thing is,” he said about the nominated movies, which, for the most part, deal with heavy themes, “they’re not all about psychopathic killers; only about 80 percent of them. I’m the guy they call in whenever none of the movies crack $100 million at the box office. Bring in the cable guy!”

Points out The Times: Stewart was slighting the comedy Juno, whose take, so far, is $125 million.

ABC will broadcast the Oscars on Sunday. 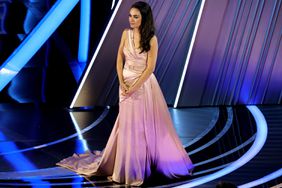