Although the writers’ strike continues to slow down the award season, on Tuesday night the people were heard – and not just in New Hampshire.

Yes, the 34th annual People’s Choice Awards carried on. Rather than cancel the show, producers retooled it as an understated, “newsmagazine”-style broadcast, hosted by Queen Latifah on CBS. The actress acknowledged the changes immediately, telling viewers, “I know this show’s a little different than last time. But we have what’s important – you, the people, and all your favorites all night long.”

Apart from the host – who spent much of the broadcast directly addressing the cameras and walking around an empty studio – celebrity appearances were relegated to vintage clips (montages mostly of memorable moments) and prerecorded acceptance speeches. Top winners included Johnny Depp and Reese Witherspoon as favorite male and female movie star, respectively, and Justin Timberlake as favorite male singer.

Even in the taped acceptance speeches, the writers’ absence was noted often. As Joaquin Phoenix received his favorite leading man trophy, he flipped through cue cards rather than speaking. “I’m speechless without the writers,” his cards read. “Seriously. But in my own quiet way, I want to thank the millions of fans that voted for me for favorite leading man.”

Here is a rundown of some of the night’s big winners:

Pirates of the Caribbean: At World’s End 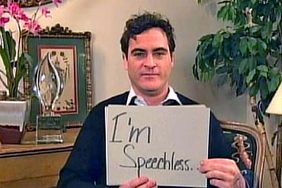