John Goodman Once Had an Incredibly Awkward Run-In with Kristen Wiig, Says He'll 'Never Speak to Her Again'

"I really like her, and it was embarrassing," Goodman said on meeting Wiig.

John Goodman awkwardly fangirls over celebrities like the rest of us.

During his interview on The Howard Stern Show, the actor shared a story about his epic fail when he tried to introduce himself to Kristen Wiig.

“She was talking to somebody else, and I was just – I think she’s so great, and the social barriers broke down and I interrupted the conversation,” Goodman, 63, confessed, adding, “And I would just hate for somebody to do that to me. And she goes, ‘yeah, I’ll talk to you in a minute.’ [makes sound of bomb dropping] It was like the Atom. I shrunk down to Atom size. I really like her, and it was embarrassing, so I’ll never speak to her again.”

There’s no doubt Goodman is a big-time A-lister (just look at his film and TV credits), but even he admitted that he doesn’t really fit in with the Hollywood crowd.

Later on in the interview, the Golden Globe winner shared what it was like to hang out with his Monuments Men costars George Clooney and Matt Damon.

“I tried to hang with them, but Matt and George would always have these conversations, and they’d go out for cocktails afterwards,” Goodman said. “I don’t really drink, and I don’t bring a lot to that party because they’re super A-level guys.”

While Damon, Clooney and Wiig may not become his future BFFs anytime soon, Goodman does have one good friend who happens to be a newly minted Oscar winner: Brie Larson.

“I love her. She is so charismatic. She would organize – she was like the only girl there, on set… every weekend she would organize stuff to do for people,” he said of his Kong: Skull Island costar. “We’d go look at kangaroos and she’d organize a trip to an amusement park after they closed. Just stuff for people to do. Because she’s over-sensitive about people getting nervous and angry and on each other’s nerves. She’s incredible.” 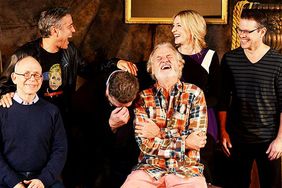 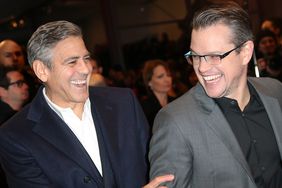