The TV host, who split from Sarah Silverman, dresses as Rosie O'Donnell on The View

Just days after Jimmy Kimmel and Sarah Silverman split for the second time, the late-night host was back to his usual hijinks.

In a playful debut appearance on The View Monday, Kimmel surprised the ladies when he walked out during the show’s live broadcast from Walt Disney Studios dressed up as former View moderator Rosie O’Donnell.

Still, even being dressing in drag did not distract the ladies from the recent news about his personal life. When Sherri Shepherd asked about his split from Silverman, Kimmel kept his answer light.

“The only thing better than breaking up is going on The View right after you break up,” Kimmel said. “It’s really [like] living a dream.”

So, why did Silverman dump Kimmel? “What do you mean, what happened? Look at me. What do you think happened? I’m a 41-year-old man with a bra filled with Koosh balls,” he said. “I’m an imbecile. She couldn’t date an imbecile anymore.”

Asked if the relationship was really over, he said, “I don’t know, ask her.”

As for how the ladies reacted to his impersonation of O’Donnell, which included wearing Capri pants, a blouse, clogs and a wig, a bemused Joy Behar quipped, “Who are you supposed to be?”

Kimmel responded: “I think you know who I’m supposed to be. Things ended abruptly with Rosie and I wanted to give you ladies a chance to say goodbye.”

“You sit down and the first thing you say is that I look ‘disgusting,’ ” Walters said, explaining that she hoped that Kimmel would be “adorable, sweet and nice.” She also explained why he’d never been asked to appear on The View – because of his, well, sense of humor.

“You said many awful things about us – day after day,” Walters said. But Walters soon lightened up – and she wanted to show there were no hard feelings. “It’s about time you and I gave each other a big hug, ‘Rosie,’ ” she said as she hugged Kimmel.

Responded Hasselbeck: “That’s like killing two birds with one stone.” 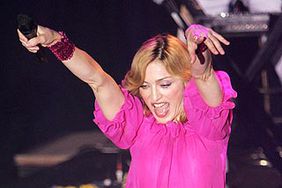 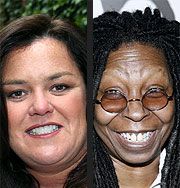 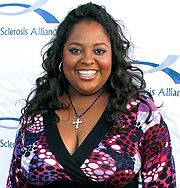 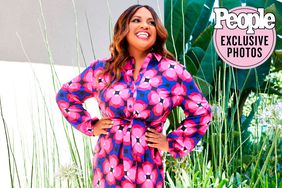