Jim Brown vs. the Judge

Football Hall of Famer Jim Brown, railing against a community service sentence in his domestic violence trial, filed court papers accusing the female judge in his case of being biased. The motion claims Municipal Judge Dale S. Fischer was chief executive officer of a legal organization that Brown says discriminates against men in general and black males in particular. However, the executive director of the group, founded by Warren Burger, former chief justice of the U.S. Supreme Court, said he believes that the group has a higher percentage of African American members than the American bar. Brown’s motion, filed this week, asks that Fischer be removed from the case and his sentence voided. Brown was ordered to do 400 hours of community service and enroll in a domestic violence counseling program after a skirmish with his wife. Judge Fischer said Thursday that she would answer Brown’s allegations within 10 days. 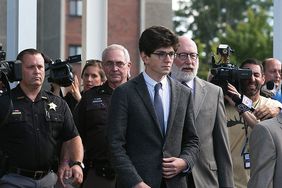