Ten days after her divorce from Nick Lachey became final, Jessica Simpson marked her 26th birthday on Monday with her parents and several close friends in Cabo San Lucas, Mexico.

On the agenda for Simpson and hers pals, including hairstylist Ken Paves and former assistant CaCee Cobb: “Everything you do at the beach, a Simpson pal tells PEOPLE. “They drank margaritas. They laid out in the sun.”

The party kicked into high gear that night, with a beachside bash. “They had sangria and Mexican food and sat around telling stories and dancing,” says the pal. “Jessica is the (happiest) she has ever been.”

The intimate party was a marked contrast to last year’s blowout, attended by 150 of Simpson’s buddies (including Mandy Moore and Eva Mendes – and Lachey, of course).

Still, the pop star will be back in the limelight soon: Simpson debuts the video “A Public Affair” next Wednesday. Plus her movie, Employee of the Month. opens Sept. 15.

She may even cross paths with her ex soon: She is hosting the Aug. 20 Teen Choice Awards, where Simpson, Lachey – and his new squeeze Vanessa Minnillo – are all nominated. 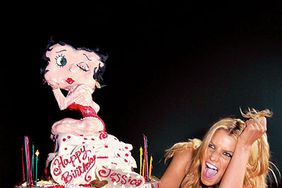