Peek inside the world of the Dukes of Hazzard star, from her new bod to her famous marriage. By Emily Fromm and Janice Morris

"I want people to know that I'm a strong woman," says Dukes of Hazzard star Jessica Simpson (at a July 30 screening in Knoxville, Tenn.). "So I went after this role as hard as I could and I got it." In her first big-screen turn, Simpson steps into the short shorts of '70s TV icon Daisy Duke.

Married for nearly three years, Simpson and husband Nick Lachey (at the ESPY Awards in Hollywood on July 13) still act like Newlyweds. But they admit their frequent separations for work can be tough. "We stay close using phone, e-mail and video-conferencing," says Lachey. "But there's really no substitute for being together."

"Twenty-five is going to be a good year for me," Simpson told PEOPLE at her July 9 birthday party at her parents' house in Encino, Calif. Guests included Jake Gyllenhaal, Wilmer Valderrama and Mandy Moore, but the best birthday surprise came courtesy of husband Lachey: new rims for her Range Rover. And as for his most romantic gift? "He's let me grow up," she says.

Simpson shaped up to fit her Daisy Duke shorts – and showed off her body in the video for "These Boots Are Made for Walking" (left). But the skimpy clothing covering her toned physique earned a lashing from the Christian group The Resistance, who said she looked "like a stripper." Simpson – a pastor's daughter – shrugged off the criticism, saying, "If they're really good Christians, the judgment wouldn't be there."

One of the many rumors plaguing Simpson: that she'd had an affair with her married Dukes costar Johnny Knoxville (at the MTV Movie Awards in June with fellow good ol' boy Seann William Scott). Both actors denied the story, with Knoxville telling GQ, "Jessica and I are just friends. She's a great girl and all that, but all the rumors (are) hurtful to the families that are involved."

Before traveling to military bases to promote Dukes, Simpson (at Robins Air Force Base in Georgia on July 26) and Lachey made overseas stops in Germany and Iraq this spring as part of a USO-hosted tour. "I think it brings us closer," Simpson says of the couple's interactions with the troops. "To see it together and impact people's lives together, that is a pretty cool deal."

Despite her newfound independence, Simpson remains as close as ever to her biggest supporters: manager dad Joe and mom Tina. Joe steadfastly defends his daughter's marriage, telling PEOPLE that the Simpsons and the Lacheys take a similar approach to life: "We stick together. So we laugh together. We cry together. We drink together."

Once known for leather jumpsuits and all-denim getups, Simpson has transformed herself into a fashion icon (from left: in Jean Paul Gaultier in June; looking boho-chic in May; in Michael Kors in May). "I've become a little bit of a snob and started buying designer," she tells PEOPLE. "Now that I've been wearing all the cute designer clothes, I haven't been a fashion 'don't' very often."

Although little sister Ashlee, 21, is a busy singer and reality-show star in her own right, she and Jessica (in New York City this spring) still hang out whenever they can. "People don't realize that having an older sister is so much fun," Ashlee told PEOPLE early this year.

Simpson made an unlikely pal while shooting Dukes: her costar, Willie Nelson. The singers, who recorded a duet for the movie's soundtrack, performed for troops at Ramstein Air Base in Germany as part of the USO tour in April. "I enjoy listening to her sing and watching her act and hanging out," Nelson says. "She's turned out to be a pretty good buddy."

Days after a Web site published an erroneous report (which was quickly retracted) that Simpson and Lachey had filed for divorce, the couple showed solidarity in June at a supermarket near their Calabasas, Calif., home. "I always wear my wedding ring now," Simpson says jokingly. "I can't sit here and complain about (the rumors). I don't have a bad life, I really don't. So don't have a pity party for me."

She's a superstar, but Simpson (at the Marine Corps Air Station in San Diego on July 29) is never too busy to stop and chat with fans. "Jessica is sort of sitting on the hot surface of the sun at the moment," Dukes director Jay Chandrasekhar has said. "Everywhere she goes, they're looking. But she's a really nice, down-to-earth girl." 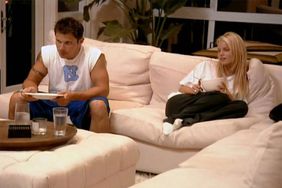