Jessica Simpson: I Scare Guys Away

It’s hard to believe that Jessica Simpson would have trouble finding a date, but that’s what she said on The Ellen DeGeneres Show Monday.

“I think I’m too hard to be in love with,” Simpson, 26, told DeGeneres. “It ends up on the cover of every magazine. I scare people away. I’m a lot to take on.”

She recently dated singer John Mayer, but the relationship has cooled off. “The explosive media attention put a chill (on the romance),” a close source told PEOPLE. But “there’s still a chance. They’re still talking.”

Simpson also told DeGeneres she has no regrets about her three-year marriage to Nick Lachey (they split in November 2005). “I’m so proud of that relationship that I was in,” she said. “I’m proud of the marriage that I had and I think that Nick is an amazing man.

“I regret nothing and it made me who I am right now,” she continued. “And right now who I am, I am so in love with. I am so happy with who I am. It’s all about the journey.”

Simpson did say she’s ready to be in a relationship. “I wish I was in love,” she told DeGeneres. “I need to be in love.” And even though her celebrity intimidates potential suitors, she says: “I’m a good person – I promise!”

She also said that despite the title of her new album, A Public Affair, it’s not about her relationship with Lachey, but about living her life in the spotlight.

“A Public Affair, as a title, is kind of raunchy in way, because I’m trying to trick people into buying it, because sex sells,” she laughed. “But it’s not about that at all!”

In fact, another Hollywood icon was the inspiration for the title, she said. “I was actually watching a Brigitte Bardot special and it was about how her life was always a public affair, and she could never have anything to herself that’s private – and that’s how I felt at that very moment.”

Still, Simpson conceded that the album’s tone was influenced by the events unfolding in her life. “During the (beginning of) making of the record I was married. I was writing love songs,” she said. “After going through an emotional time, I needed to have fun, to go out with my girls and shake my booty.” 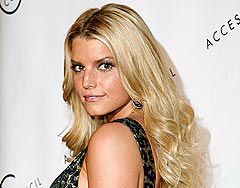 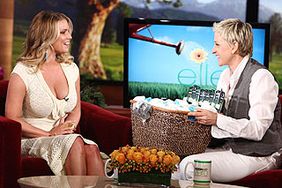 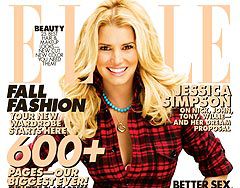 Jessica Simpson 'Loves to Be in Love'