Is Jon Lovitz and Jessica Lowndes’ May-December romance too wild to be true? Fans seemed to think so for much of Monday.

And they were right!

The Saturday Night Live alum, 58, and Lowndes, 27, got tongues wagging about their “secret relationship” in a series of posts on social media over the weekend, although many on social media quickly began to think the duo might be gearing up for April Fool’s Day.

And Lowndes confirmed suspicions Monday afternoon by posting and Instagram video of herself wondering, “Just because it’s still late March, is it too early to say ‘April Fools’?” and letting the camera pan to a computer screen featuring a paused clip of Lovitz in her new music video.

Though the pair have been setting up the gag for several months, Lowndes kicked speculation about the supposed romance into high gear on Friday with a snap of her legs gripped by a man’s hand accompanied by the caption: “his hands are wise and tell a thousand stories #smitten #hatersgonnahate.”

The 90210 star followed up with more hints, including a photo of their ice cream date for two, complete with the caption, “You say sugar daddy but I say ice cream daddy! Lol.”

“No, I haven’t been hacked. I’m just really excited to be able to finally share this secret with you guys,” Lowndes said in a video clip, Friday, before posting a close-up of what looked like a huge engagement ring.

In another video, shared Sunday, Lowndes rolled around in bed while Lovitz could be heard off-screen promising that he was not “videoing” her.

“When bae films you waking up in the morning,” the actress wrote. “#TooOldToUseHashtags #MrBig.”

VIDEO: You Will Never Guess What Advice Carmen Electra Gives to the Couples on WE Tv’s Ex Isle

“Easter with my bunny, @jessicalowndes,” he wrote, with several heart emojis.

He even lashed out at critics, responding to one Twitter user who noted the couple’s 31-year age gap by writing “nice jealousy!”

Others warned fans not to “fall for it,” with one user writing, “Jon Lovitz and Jessica Lowndes are goofing on us.” 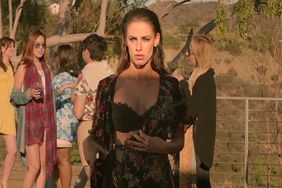