Jennifer Love Hewitt wants to hand out that final rose, plus more from Robert Pattinson, Dianna Agron and other stars

"That's what he should be ashamed of in the morning. All those beautiful pillows! Egyptian cotton!"
– Robert Pattinson joking about alter ego Edward Cullen's anticipated bed scene with onscreen love Bella in The Twilight Saga: Breaking Dawn, to Entertainment Weekly

"It's really sad looking at people like Lindsay Lohan. She's an amazing actress, but you see what happens when people know too much about your personal life."
– Glee star Dianna Agron, on keeping her private life private, to Cosmopolitan

"Sometimes I think that the one thing I love most about being an adult is the right to buy candy whenever and wherever I want."
– Ryan Gosling, sharing his love of sweet treats, to Esquire

"She could have a 10-inch nose or a two-inch nose. It doesn't matter to me! I love her for who she is."
– Kasey Kahl, on girlfriend Vienna Girardi's plastic surgery, to PEOPLE

"I can only say that I did not have a mother, and I would have very much liked that one to be mine!"
– George Lopez, gushing about hands-on mom and close friend Sandra Bullock, to PEOPLE

"I felt that it was really important to preserve the integrity of the heat and keep the crotch sweat in the movie."
– The Help star Bryce Dallas Howard, on maintaining a sense of authenticity while shooting in Mississippi's sweltering summer heat, on The Tonight Show

"Adam totally ruined my plan. I was really actually looking forward to a little alone time, and then I fell in love like a fool!"
– Anne Hathaway, on unexpectedly falling for beau Adam Shulman, to Marie Claire U.K.

"Italian for Dummies. The other one was Dirty Italian."
– Mike "The Situation" Sorrentino's go-to study guides to maintain his A-game while filming Jersey Shore in Italy, on The Tonight Show

"It's like owning a dog and the dog will only sit next to its master."
– Simon Cowell, on the comforts of reuniting with former American Idol co-judge Paula Abdul on The X Factor, to PEOPLE 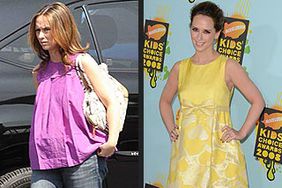