In an exclusive interview, Aniston tells PEOPLE reports of an engagement to Vince Vaughn are "insane"

Jennifer Aniston, in an exclusive interview Wednesday with PEOPLE, denied published reports that she and Vince Vaughn are engaged, calling the stories “insane” and saying that “people are getting fed a lot of bull.”

“I’m not engaged and I don’t have a ring and I haven’t been proposed to,” Aniston said in a telephone conversation she initiated to debunk the engagement rumors. “Normally we don’t even acknowledge these things because they’re endless, at this point. The thing that got me was that I was getting phone calls from Greece! My Aunt Mary in Greece is getting accused of lying! I mean, they’re getting angry.

“My dad calls and he says, ‘Honey, it’s on the CNN crawl,’ and I’m going, ‘Wait a second!’ When it starts to travel over into the Today show and CNN and supposedly reliable and accurate news programs, then you just go, ‘This is insane.’ People are getting fed a lot of bull.”

Aniston says she had to laugh at the recent report detailing Vaughn’s alleged proposal aboard a private jet following a Mexico vacation in late June. “It’s so funny. With Vince, it’s like the joke we had. I said, ‘Okay, so you’re on a romantic location. You’ve got the beach, you’ve got the sunset, but no, no, you’re going to wait for an airplane ride,’ ” she says. ” ‘First of all, are you going to try and curb my fear of flying? Are you trying to trap me on a plane?’ ”

As for her relationship with Vaughn, whom she met last year while filming The Break-Up, “We’re just being,” Aniston says. “We’re having a good time.”

Aniston says she was moved to speak once the reports were picked up widely by mainstream media. “I don’t feed into that,” she says of the steady stream of rumors about her personal life. “(My friends and I) don’t talk about it. We don’t hash it out because it’s not true. The only reason I’m saying something is because if we’re listening to the news, we’re supposed to be believing in the news.

“Tabloids are going to lie all the time. You re prepared for that. But it’s the news. And you think, ‘Well, we need to trust what our newscasters are saying when we have this horrific situation that’s actually taking place in the world. I mean, we are getting reported the truth, right?’

“The American people need to believe (the news),” Aniston says. “Please. Get it together. So that’s all.”

Aniston: Not in a Race with Brad to Wed 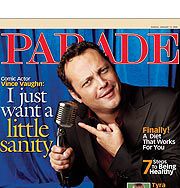 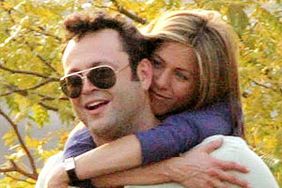