"The movie has a beautiful way of unfolding itself without giving the story away," she says at the drama's Sunday premiere

Sure, Jennifer Aniston stripped down for her latest role – but it’s her dramatic turn on the big screen we’re talking about.

The actress, 45, is already earning Oscar buzz for her turn in Cake, in which she plays a mourner suffering chronic pain.

“It was just a wonderfully beautiful story of a woman in extraordinary pain, living through an unthinkable trauma,” Aniston told PEOPLE at InStyle and The Cinema Society’s Sunday premiere of the indie film in New York City.

And while her character is battling demons, “I also found her quite humorous and quite endearing,” says Aniston. “You have empathy for the character.”

The Friends alum says she was ready for the role’s change of pace from her presumed persona – not that it was easy.

“That was a challenge for me. How do we tell this story without having everyone hate her?” Aniston says. “I actually loved her. But the movie has a beautiful way of unfolding itself without giving the story away and allowing the audience to go with the journey as it’s being told.”

As for the early awards season whispers? Aniston is surprised, saying (with a laugh) she’s “flattered” and that she reacts to the buzz “awkwardly and stutteringly.”

The actress later celebrated the film at a Grey Goose-sponsored fête at Jimmy at The James New York, where fiancé Justin Theroux joined her.

“It ticked all the boxes that an actor dreams of,” Aniston added to reporters of the role. 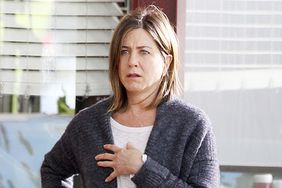